Article by Cheyanne Encisco courtesy of the West Australian. 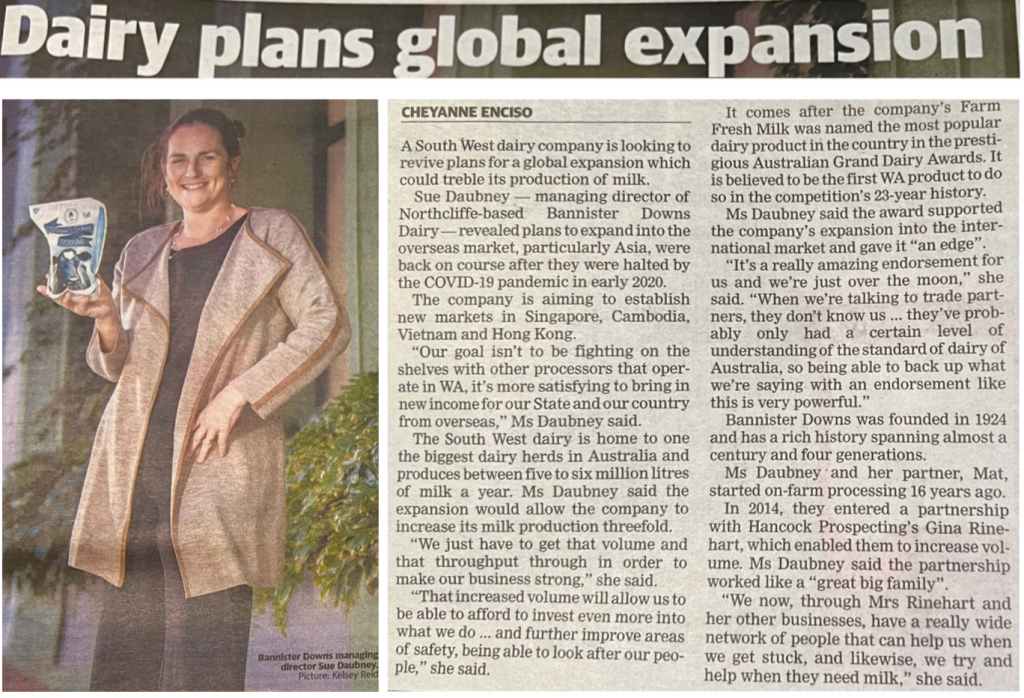 A South West dairy company is looking to revive plans for a global expansion which could treble its production of milk.

Sue Daubney — managing director of Northcliffe-based Bannister Downs Dairy — revealed plans to expand into the overseas market, particularly Asia, were back on course after they were halted by the COVID-19 pandemic in early 2020.

The company is aiming to establish new markets in Singapore, Cambodia, Vietnam and Hong Kong.

“Our goal isn’t to be fighting on the shelves with other processors that operate in WA, it’s more satisfying to bring in new income for our State and our country from overseas,” Ms Daubney said.

The South West dairy is home to one the biggest dairy herds in Australia and currently produces between five to six million litres of milk a year.

Ms Daubney said the expansion would allow the company to increase its milk production threefold.

“We just have to get that volume and that throughput through in order to make our business strong,” she said.

“That increased volume will allow us to be able to afford to invest even more into what we do… and further improve areas of safety, being able to look after our people,” she said.

It comes after the company won a gong last week, with its Farm Fresh Milk named the most popular dairy product in the country in the prestigious Australian Grand Dairy Awards.

It is believed to be the the first WA product to do so in the competition’s 23-year history.

Ms Daubney said the award supported the company’s expansion into the international market and provided it “an edge”.

“It’s a really amazing endorsement for us and we’re just over the moon,” she said.

“When we’re talking to trade partners, they don’t know us… they’ve probably only had a certain level of understanding of the standard of dairy of Australia, so being able to back up what we’re saying with an endorsement like this is very powerful.”

Bannister Downs was founded in 1924 and has a rich history spanning almost a century and four generations.

In 2014, the couple entered into a partnership with Hancock Prospecting’s Gina Rinehart, which enabled them to produce their premium product in larger volumes.

“We now, through Mrs Rinehart and her other businesses, have a really wide network of people that can help us when we get stuck, and likewise, we try and help when they need milk,” she said.