Article by Chris Herde courtesy of the Australian. 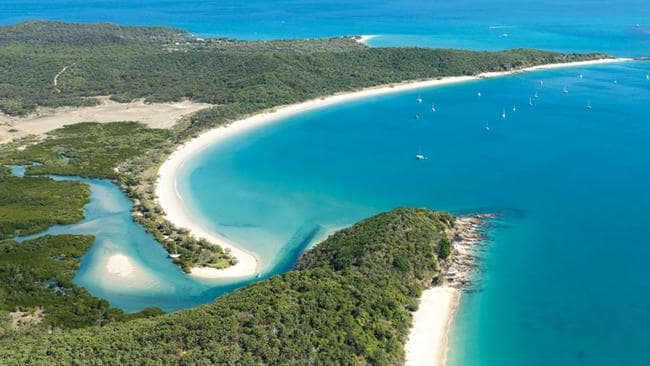 Australia’s richest person Gina Rinehart has confirmed she is working towards the purchase of one Queensland’s tarnished island resorts with plans to make it “world class’.

A statement from Hancock Prospecting says they have entered into an agreement to potentially acquire the Great Keppel Island development project from Tower Holdings, subject to a “myriad of state and local government approvals”.

There is no confirmation of the price but it is believed to be around $50m.

It is understood the deal will for the 970.9ha of development approved land on the island, subject to State and Federal government requirements.

Current development approvals for the island include a 250-room beach front hotel, 300 luxury apartments, 285 luxury villas, 9000sq m of retail shops and a 250-berth marina. The airstrip also has approval to be extended from the current 800m.

Hancock Prospecting said the potential redevelopment of Great Keppel Island was an opportunity to make this one of the best resorts in Australia, with its special location and white sandy beaches.

“We hope to be able to make it better than it has ever been, with a world class year round beach club, sandy bars, shopping and more experiences circling around a marina modelled after successful marinas like Puerto Banus,” the statement said.

“We envision a year round swimmable beach club and an underwater bar being able to bring the benefits of overseas tourism to Australia.”

The transaction is subject to conditions being satisfied, including suitable State and Local Government approvals being provided that allow viable redevelopment of the Island.

Hancock Prospecting said with the announcement of the 2032 Olympics to be held in Brisbane, the redevelopment of Great Keppel Island presents as a great time to showcase Queensland as a premium, world class destination.

“Currently, for various reasons, Great Keppel is not a showcase for Queensland. We wish to maintain and improve its natural beauty and tourist facilities, subject to all government approvals, enabling this to make possible, for Queenslanders and others to enjoy for generations to come,” the statement said.

“Hancock welcomes the focus of the State Government to support and encourage investment in the State of Queensland and we look forward to working with the Queensland government and Livingstone Shire Council and all stakeholders for the appropriate revitalisation of this beautiful island and tourist destination.”

“Gina Rinehart is very passionate about Australia and Queensland and hopes that her vision is shared by the Queensland community.

“She is excited to bring the best of what she has experienced overseas to Great Keppel Island, and the Hancock group, subject to approvals, is excited to be able to share that with Queensland and all Australians.”

Sydney-based developer Terry Agnew’s Tower Holdings bought the leasehold for the island resort off the Capricorn Coast for $16.5m in 2006.

It was closed during the global financial crisis two years later and he put the leasehold on the island on the market in early 2018 and the campaign attracted interest from around the world including America, China, Singapore, Australia, the United Arab Emirates and Europe.

Since then there have been a couple of buyers come and go.

Wei Chao Pty Ltd, directed by Wan Long Wei and Pauline Wei from Taiwan, had exchanged contracts to buy the leasehold of the island for more than $50m but the sale process stalled and eventually fell through.

Sunshine Coast-based developers Altum Property Group also signed a contract to take over the lease in 2019 but the State Government rejected the purchase based on the findings of an independent financial and managerial capability assessment.

The island was made famous by a successful 1980s tourism advertising campaign: “Great Keppel Island: It’s a great place to get wrecked”.

If the Great Keppel Island sale is successful it will come on hot the heels of Sydney-based Oscars Hotel Group — owned by brothers Bill and Mario Gravanis — who will pay close to $20m to purchase Long Island in the Whitsundays after a deal struck by CBRE Hotels.

The island was sold by Sydney-based David Kingston, a former managing director of Rothschild Bank, who put it on the market in 2016 after a cyclone closed the resort.

Recently China Investment Group Daydream Island’s owner, China Capital Investment Group, has been in talks about the chances of offloading the resort in the Whitsundays.

Ms Rinehart has been linked to a number of Queensland property assets after putting $300m worth of outback cattle stations on the market earlier this year. She recently sold three Western Australian cattle stations in the portfolio for a combined price of about $100m.

It is believed she will also pay $34m for a beach house in Noosa, marking one of the highest prices paid for a residential property in Queensland, although the deal has not yet settled.